SAINT BENOIT: St Benedict’s day : July 11. This is the day of the removal of the relics of St. Benedict to the Abbey of Fleury – Saint-Benoît-sur-Loire (France) 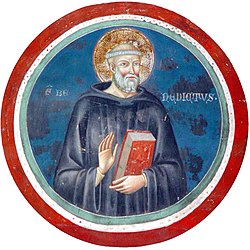 Considered the Father of Western Monasticism – Proclaimed Patron of Europe on 24 October 1964 – Patron Saint of Scouts of Europe. « Wanting to please God alone, he lived alone in the sight of God. « (St. Gregory the Great, 540-604, Pope). The experience of loneliness opened his heart to the knowledge of himself and opened the way for God. After three years of reclusive life, he was joined by disciples attracted by the radiance of his inner wealth. Around 530, he founded the monastery of Monte CassinoThere he wrote his rule inspired by an existing document, the « Rule of the Master. » The first term, the first invitation of Benedict is « LISTEN » …

« Listen, my son, and open the ear of your heart; accept the recommendations of a real father and follow them effectively » (Rule of St. Benedict – Prologue). Cistercian spirituality is based on this rule of life that has trained generations of monks and nuns from the sixth century to the present day. As the following article highlights, the rule of Benedict is astonishingly modern. The extract is taken from : www.narthex.fr/blogs/abbaye-de-cluny :

« The Rule of St. Benedict shows some surprisingly modern concepts … which are still in use today in modern management. Its 73 chapters (some of which are outdated or unrelated to the business world) include:

Please enable Strictly Necessary Cookies first so that we can save your preferences!